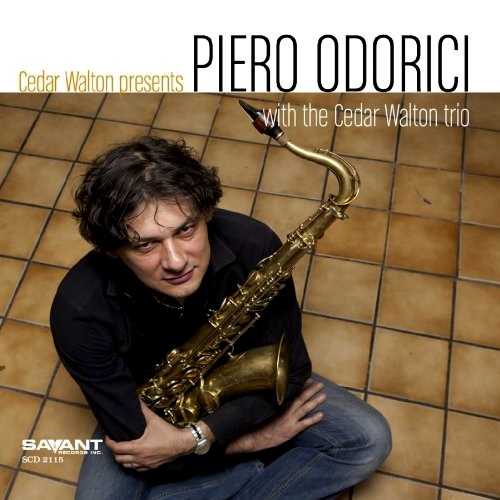 In addition to being an excellent pianist and composer, Cedar Walton makes for a fine A and R man. He came to Savant Records’ asking to make a record with a relatively unknown Italian tenor saxophone player from Bologna named Piero Odorici who had paid his dues in Italy by playing with the likes of George Cables, Curtis Fuller, Jimmy Cobb and others. For his American recording debut, Piero is backed by the Cedar Walton Trio with David Williams on bass and Willie Jones III on drums in a selection of jazz standards and original compositions. You can hear the echoes of the last masters of the tenor saxophone like John Coltrane, Dexter Gordon and Stan Getz in Odorici’s playing. “Cesadilla” opens the album with strong uptempo tenor saxophone and vibrant, rich piano accompaniment. The music has a mid-period Coltrane feel which is interesting because Walton played on John Coltrane’s Giant Steps sessions. The lush ballad “For Someone So Beautiful” has a patient Dexter Gordon feel, romantic with subtle brushwork. The old standard “Over the Rainbow” is given a fresh reading, still remaining its lyricism, but ramping up the speed. The music is fast paced and spirited yet accessible and strong with great support from Walton and the rhythm section. The bebop flag-waver “Tin Tin Deo” has snappy drumming propelling a strong full band reading. Jones is really the key here, keeping the rhythm strong and powerful. Strong drumming also drives “Native Son” where Jones gets a really fine drum feature, with full band melodic improvising bookending the solo. “If I Should Lose You” concludes the album with a loosely played version of the standard, buoyed by a strong subtle piano solo from Odorici’s mentor.

9 anni ago in News